Summary of the Oratorical Program:

The Oratorical Program is a function of the American Legions’ “Americanism Pillar”. The Oratorical Program is a constitutional speech contest for high school students and it offers scholarships upwards of $25,000. The contest has a prepared oration and an assigned topic which is assigned the day of the contest. The prepared oration must be on some aspect of the Constitution, with emphasis on a citizen’s duties and obligations to our government. The same subject and oration used in the department contest must be used in the national contest. The purpose of the assigned topic discourse is to test the speaker’s knowledge of the subject, the extent of his or her research, and the ability to discuss the topic as related to the basic principles of government under the Constitution.

A Champion is Crowned! 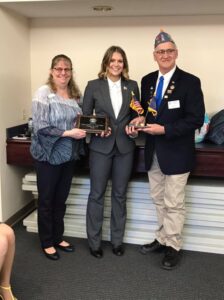 She earned $2,500 in scholarship monies but unfortunately will not able compete at the National contest held in Indianapolis, Indiana against winners of contests from the other 52 states and territories of these United States of America. However, since the National Oratorical Contest was cancelled, National is honoring all Department winners by giving them an additional $2,000 scholarship.

The 2021 Department Oratorical Contest had 5 District winners participate this year. Each contestant delivered a prepared oration as well as an oration on a randomly assigned constitutional topic

A special thanks to all other contestants for representing their districts.

Since 1938, The American Legion High School Oratorical Scholarship Program has encouraged the nation’s high school students to study the U.S. Constitution and to hone their public speaking skills. 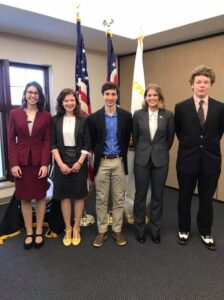 Fill out the form below, thank you.