Listed below are The American Legion Department of Ohio’s official responses to the incident that occurred on Memorial Day, at Ohio Hudson Post 464.

The American Legion Department of Ohio does not hold space for members, veterans, or families of veterans who believe that censoring black history is acceptable behavior. We discovered that the censoring that occurred at the Memorial Day Ceremony in Hudson, Ohio, sponsored by Hudson American Legion Post 464, was pre-meditated and planned by Jim Garrison and Cindy Suchan. They knew exactly when to turn the volume down and when to turn it back up. Prior to the event, a copy of the speech was given to Cindy Suchan by Lt. Col., Barnard Kemter, US ARMY (Ret.), of which she then asked him to remove a specific part of the speech regarding a historical event in 1865 in which several newly freed black slaves were among the first to commemorate Memorial Day after the Civil War ended by giving deceased Union soldiers at a Confederate prisoner of war camp an honorable burial and by decorating their graves with flowers and organizing a parade to honor them.
These actions of Post 464, through its authorized representatives or officers in attempting to censor or suppress that portion of LTC Kemters’ speech and effectively doing so by reducing the speaker system volume, constitutes a violation of the ideals and purposes of the American Legion, as set forth in the statement of the National Commander of the American Legion dated June 12, 2020, and the 1923 Resolution, affirmed in 2017 by the National Convention, attached hereto and incorporated herein by reference thereto. Therefore, good and sufficient cause exists to revoke, cancel or suspend the charter of Lee-Bishop Post #464, Inc.
We are deeply saddened by this and stand in unity and solidarity with the black community and all peoples of race, color, religion, sex, and gender, so that those who are exclusive of such persons will know that this behavior is not acceptable in The American Legion, in our homes, our hearts, our communities, in private, public, or anywhere. We will continue to educate the value of diversity. Being different amongst each other is what makes us better – together.
The American Legion stands firm in a value it established in the form of a national resolution it adopted in 1923:
WHEREAS, The fundamental law of our country guarantees to all peoples equal rights and equal opportunities and the right to worship their God as they see fit; and…
WHEREAS, Membership of The American Legion is made up of those who served our country in a time of great stress, without distinction as to race, color, creed, or class; and…
RESOLVED, … That we consider any individual, group of individuals, or organizations, which create, or fosters racial, religious or class strife among our people, or which takes into their own hands the enforcement of law, determination of guilt, or infliction of punishment, to be un-American, a menace to our liberties, and destructive to our fundamental law; and be it finally
RESOLVED, That we consider such actions by any individual, groups, or organizations, to be inconsistent with the ideals and purposes of the American Legion.
I hope this information has helped you understand The American Legion Department of Ohio is handling this issue and is focused on eliminating any possibility of a similar incident occurring again within the great state of Ohio. If you have any specific questions, please reach out to our office at (740) 362-7478.

The Department Convention Call will be mailed to each Post in April 2021.
All Post Delegates and Alternates must be registered 15 days prior to Convention.

For more information, contact Christie White at
Programs@ohiolegion.com or call (740) 362-7478.

*Members and non-members are welcome to attend the convention and any meetings offered*
** Call Headquarters if you experience difficulties when making hotel reservations.

We are in the process of determining the most efficient and fair way to incorporate delegates equally among the Districts.

As of right now, we need ALL Enrollment request forms returned with payment to Department Headquarters NO LATER THAN April 1st if you are planning on sending a delegate. Any enrollment request forms received after April 1st will be put on a waitlist in case selected delegates cannot attend. ALL delegate registration forms need to be returned to Department Headquarters NO LATER THAN May 1st. Any delegate registration forms received after May 1st will be put on a wait list and listed as an alternate. If your delegate is unable to attend due to limited capacity, your Post can request a refund via the refund request paperwork or carry it over for the 2022 program.

As you select your delegates, please prioritize and rank your delegates in order of preference to attend the program if the number of delegates sent by each Post is limited.

We are sorry for the inconvenience this may cause, but we are determined to have a 2021 American Legion Buckeye Boys State Program as well as keeping all staff and delegates safe.

Any questions, comments or concerns can be sent to Jim Koppin at jbkoppin@yahoo.com or Christie White at programs@ohiolegion.com 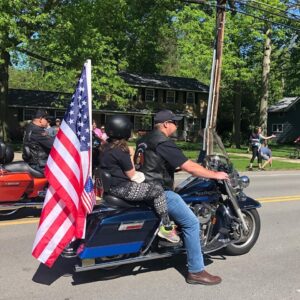 The American Legion’s new single sign-on for its web assets.

*As a reminder, this new single sign-on re-registration is for American Legion National websites only; not department. 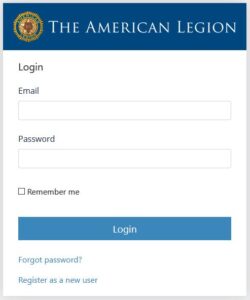 If you are a current registered user of American Legion national websites and have tried to sign on, you probably noticed the new login screen and re-registration requirement. The American Legion has created a new single sign-on process as its first stage of a multi-stage rollout that will allow The American Legion to provide a streamlined and better user experience within its web environment.

To begin your one-time single sign-on process, current registered users of American Legion web assets must re-register. This re-registration will allow members and non-members to continue accessing the valuable information and tools provided on:

(Note: this requirement does not currently apply to registered users of the Emblem Sales website.)

The new platform that The American Legion is moving to requires each user to have a unique email address as the username. This, in conjunction with a move from a vendor proprietary system, which required the Legion to renew accounts for all American Legion web properties. Please note that all member information is still within MyLegion, securely and safely housed.

Your five steps to re-register:

When you register as a new user, please fill out the entire profile to continue accessing member-only benefits such as discount codes, the ability to print membership card and manage membership renewal all through MyLegion.org.

Your questions answered:
Q: Why am I told my account no longer exists?
A: The new platform that The American Legion is moving to requires each user to have a unique email address as the username. This, in conjunction with a move from a vendor proprietary system, which required us to renew accounts for all American Legion web properties. Please note that all member information is still within MyLegion, securely and safely housed.

Q: What if I haven’t received the confirmation email after registering?
A: Please attempt to log in. You will be taken to the Please Confirm page or click here to generate a new message for the email address used during registration. You may need to enter your email address manually if you go directly to the page.

Q: What should I do if I confirmed my account but am still having trouble logging in?
A: Please verify that your new password is correct.
Look for more updates as The American Legion National Headquarters improves the web-user’s experience in the months to come.

IMPORTANT
To complete the registration process you must confirm the response email sent from sso@legion.org.

The Mission Blue Post Assistance Program (PAP) grant is intended to assist posts whose revenue has been negatively impacted from the effects of the COVID-19 health crisis within the community, as well as any government-mandated restrictions. The funds distributed from this grant are to be exclusively used to meet financial responsibilities associated with maintaining post facilities and community presence.

Grants are only approved to cover costs and fees associated with mortgage payments, rent, insurance premiums, and/or utilities. Recipient posts are prohibited from using funds to maintain or cover a loss of income from any registered post business (including but not limited to post bars, cantinas, restaurants, etc.) paying post employees, building upgrades or repairs, taxes, fines/fees/penalties, or funding post activities and programs. Posts who meet all the required criteria may receive up to $1,000.00 from the Mission Blue PAP fund.

An exciting grant opportunity is now available to access through the Ohio Office of Budget and Management (OBM) grants@obm.ohio.gov. Please Click on ‘Read More’ to learn more.

OBM requires each post to complete an application on the OBM website at https://grants.ohio.gov/fundingopportunities.aspx under the Coronavirus Relief Fund – COVID Safety Funds to Veterans Posts funding opportunity. An authorized representative and grant contact will be required to be listed on the application. After the application is approved by OBM, the grant contact will receive an e-mail confirmation. Approved applications will be processed for payment. If you have any question call Department at 740-362-7478

The purpose of this grant is to provide active brick and mortar Posts to receive Coronavirus Relief Funding up to $5,000 dollars through the Ohio Office of Budget and Management. If a Post has any questions regarding their eligibility, please contact the Ohio Grants Partnership via e-mail at grants@obm.ohio.gov.

The Department of Ohio can facilitate information and direct our Posts of this opportunity, we will have no bearing on being the proving authority on the acceptance and dispersal of each grant application. All questions regarding the grant should be directed to the appropriate OBM contact at grants@obm.ohio.gov. Although we are not a part of the application, distribution, or oversight of the grant, we will work to spread the word of this opportunity for Ohio’s veteran community.

This program provides funding to Congressionally chartered veterans service organizations in Ohio with an active post. Each active post is eligible up to a $5,000 grant to assist in operating safely during the COVID-19 public health emergency, including supporting increased sanitation costs, maintaining social distancing, purchasing personal protective equipment (PPE) and other necessary costs to comply with public health orders, local health department recommendations, and best practices.

The CARES Act requires that the payments be used to cover expenses that are necessary expenditures incurred due to the public health emergency with respect to the Coronavirus Disease 2019 (COVID-19) and were incurred during the period that begins on March 1, 2020 and ends on December 31, 2021.

This report reflects The American Legion Department of Ohio totals of all Consolidated Post Report (CPR) reporting that Posts provided for the 2020 membership year. It contains statistic totals and CPR category descriptions from all reporting Ohio Posts. 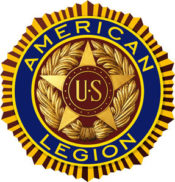 Preamble to the Constitution: For God and Country, we associate ourselves together for the following purposes: To uphold and defend the Constitution of the United States of America; to maintain law and order; to foster and perpetuate a one hundred percent Americanism; to preserve the memories and incidents of our associations in all wars; to inculcate a sense of individual obligation to the community, state and nation; to combat the autocracy of both the classes and the masses; to make right the master of might; to promote peace and goodwill on earth; to safeguard and transmit to posterity the principles of justice, freedom and democracy; to consecrate and sanctify our comradeship by our devotion to mutual helpfulness.