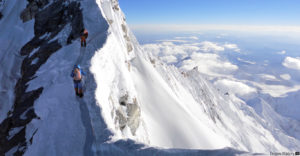 From the Depths of depression and Post Traumatic Stress Syndrome to highest point on earth, it is with excitement that The American Legion Department of Ohio announces that Legionnaire and Co-Founder of Summit for Soldiers, C. Michael Fairman of Navy-Marine Post 276 has summited Mount Everest.

Mike made the summit at 11 AM, 19 May 2016 (Nepal Time). Stay tuned to this site or our Facebook for updates as Mike makes his descent.

Six more Ohio Legionnaires will be departing from Columbus Airport on 24 May 2016. Legionnaires Dietrich Stallsworth, Steven Downey, Andrew Oakes, Anna Pelino, and Rick Amoros are heading to Nepal to deliver needed supplies as they recover from devastating 2015 earthquakes. They will trek to Mount Everest Base Camp and hopefully meeting up with Mike as he recovers and makes his descent.

For more information on the climb and the Summit for Soldiers American Legion Team see the following links:

Legionnaires Take PTSD Message to Top of the World