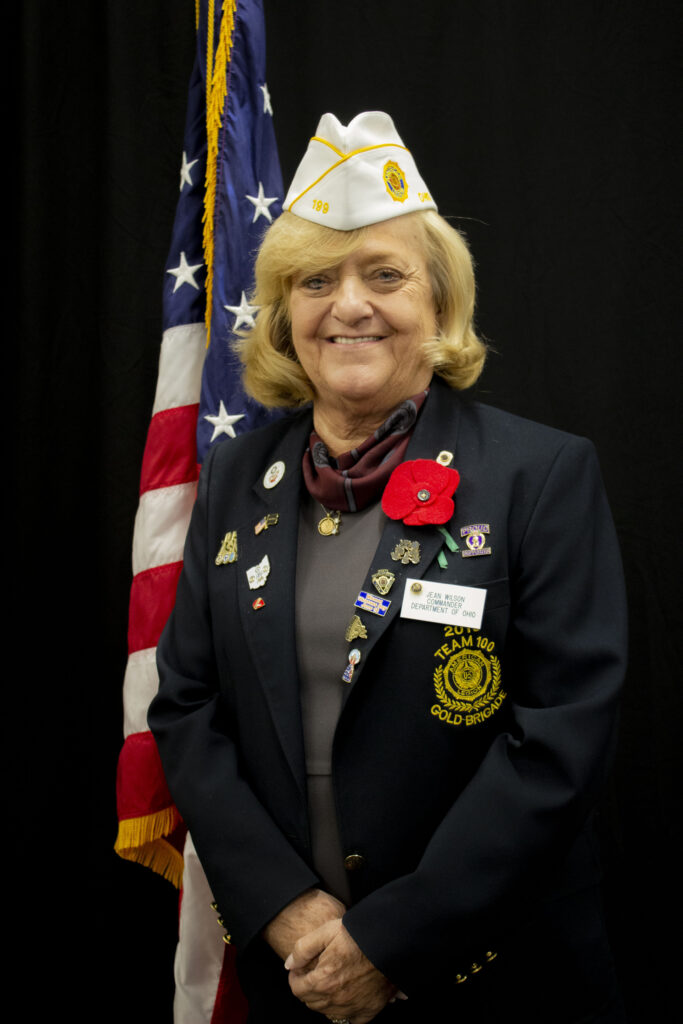 Jean met and married her husband, Jerry while both were serving in Ft Jackson SC, and they have two children, Tammie, and Woody and seven grandchildren.

Since 2011 Jean has served on the Hamilton County Veterans Service Commission and was appointed by Governor Kasich to the Ohio Women’s Task Force. For the past nine years she has served on the Harrison Mayor’s Fund and currently serving as the Board President. Recently Jean was recognized by the Xi Eta Lota, Chapter of the Beta Sigma Phi Sorority of Harrison as the First Lady of Harrison Community Service award for 2018. The City of Harrison recognized Jean’s support of not lonely Veterans and their families but her Community by bestowing the honor of being the Grand Marshall of the City of Harrison July 4, 2018, parade.

Each year the Department Commander has a special project- Jean’s is Sucide Prevention, Education and Awareness. Jean lost her father and many friends by suicide. Jean will be working with Save A Warrior. Anyone wanting to donate to her project can do so by sending a check payable to the Department of Ohio American Legion PO 8007 Delaware, Oh 43015. In the memo section note: SAW. 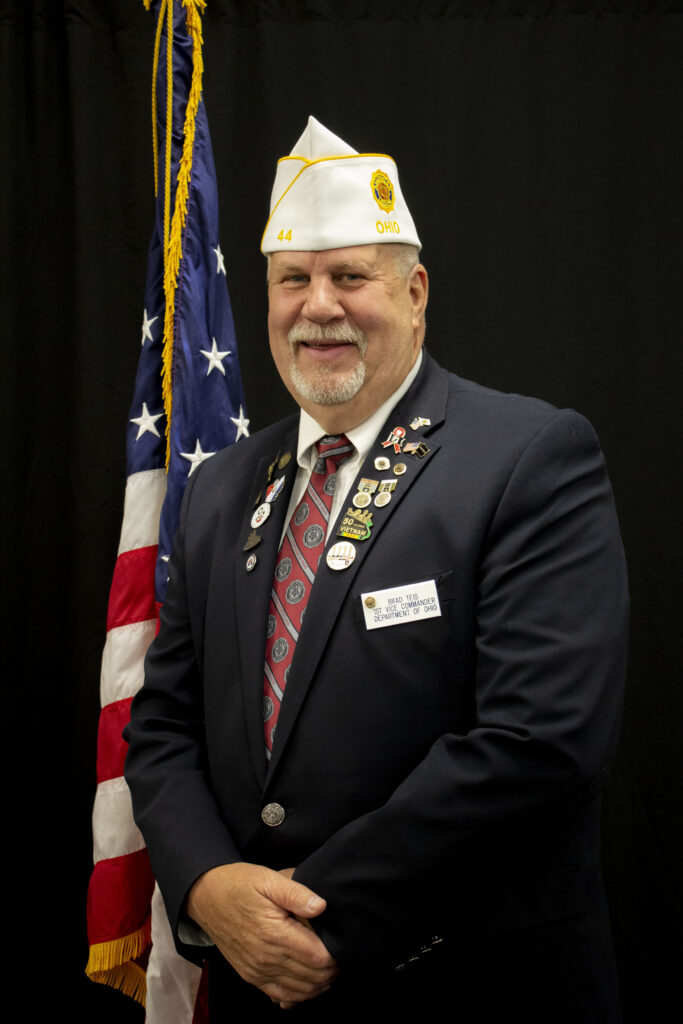 The First Vice Commander serves under the Commander of the Department of Ohio. His responsibilities include being Membership Committee Chairman, ensuring that the Legion message is heard by all veterans, and providing the overall mission for the membership year.

Brad earned his eligibility by serving during The Vietnam Era in both the Navy and Army. He also served in The Ohio National Guard at the Akron–Canton Airport. He has been the 10th District Committee Chairperson for Special Olympics, and also has served as a National Appointee to The Americanism Commission, and a Commissioner to Ohio Buckeye Boy’s State.

He is a member of The Greater Canton Veterans Council and has served on the Board of the Homes for Heroes. Mr. Teis is a Co-Founder of The Aultman-Woodlawn Compassionate Care Center Honor Team serving our Hospice Veterans and their families in their time of need. He has served as the 2019-2020 Vice President of the 10th District Past Commanders Association and also served on the 10th District Task Force and Advisory Committee.

He is very active in his community where he visits veterans in area Hospitals, Nursing Homes and Hospice Centers.

He has been married to his best friend and wife Roxanne for 30 years and they have four children, Bradley Jr, Michael, Brittany, Ryan and four grandchildren.

Charles is a 16 -year PUFL member of Brakeman-King Post 336 and earned his eligibility for the American Legion through his service in the United States Army from 1986-1991.

Charles is currently employed with the Henkel Corporation in Mentor, OH as the Distribution Manager where he is a member of the Site leadership team. Charles has worked for other companies in accounting and supply chain management such as Avery Dennison, Johnson & Johnson, and MSC Industrial.

Charles has a bachelor’s degree in accounting and an MBA in Business Administration from Cleveland State University.

Charles has been married to his Tammy, a member of Auxiliary Unit 336, for 33 years and resides in Concord, Ohio. They have one son Brandon a US Army veteran who served in Afghanistan, and three grandchildren Greyson, Leilani, and Journee.

Charles is supporter of the programs of the American Legion, and moreover he is a supporter of veterans, in everything he does he seeks to put veterans first.