Ohio Legion and SAL leadership, members, staff, and esteemed guests gathered together on March 13th, 2020 at the Department of Ohio celebrate the achievements and accomplishments of The American Legion in its’ 101st year with an emphasis on the programs of the Americanism pillar. An inspiring Legion video and slideshow of the recent Americanism and Government trip was shown along with presentations from the Commander, Adjutant, NEC, and other important Legion family members. Everyone enjoyed some refreshments and a custom cake made in addition to the heartfelt fellowship with each other to celebrate this important annual milestone.

Thank you for a successful Centennial Ball 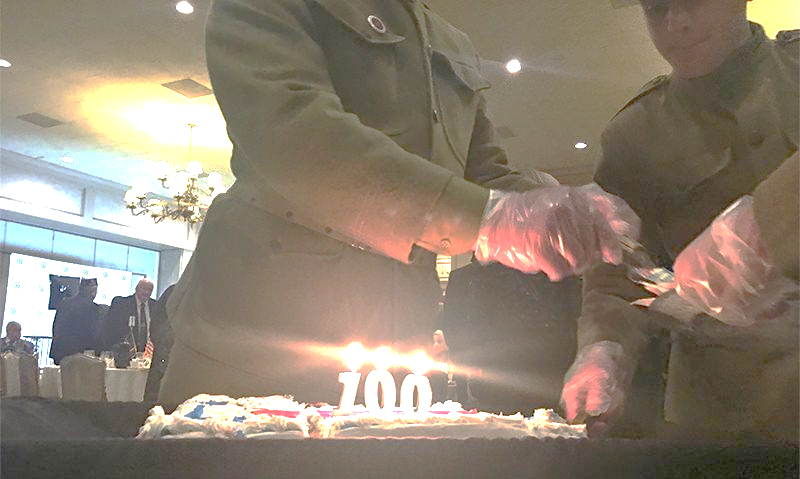 Tribute was paid to American Legion founders from Ohio, and the newest generation of wartime veterans in the organization came away “inspired,” said 25-year-old Ashley Gorbulja-Maldonado, a member of Akron Post 808 and emcee of Friday’s Department of Ohio centennial ball in Columbus. “I don’t know about you, but I am motivated,” she told crowd of more than 300. “I’ve never been more motivated, being a student veteran and continuing the mission. This is our organization, and we are in good company. One family.”

The American Legion Family in Ohio traces its roots to early 1919 and the founding of the organization. The journey that followed produced more than 520 local posts and hundreds of thousands of members over the century (nearly 90,000 today), who have helped countless veterans, servicemembers, students, families, athletes and law-enforcement officers, starting with the World War I generation.

Dressed in 1917 doughboy uniforms of the American Expeditionary Forces, re-enactors escorted attendees of the ball to their tables where American Legion legacy and vision were celebrated in speeches, proclamations, music and the announcement of a new Ohio American Legion scholarship to help members of Student Veterans of America travel to their annual conventions.

American Legion Past National Commander and Past National Adjutant Robert W. Spanogle reflected on the massive influence one Ohio Legion founder, Frederic W. Galbraith, had on the organization – and on all future veterans in the decades after the Legion was formed.

“He emerged as one of the most outstanding commanders,” Spanogle said of Galbraith, first commander of the Department of Ohio and second American Legion national commander.

“He launched programs on health care, disability benefits, employment and care for families who lost parents. He asked all the posts throughout this country to give him a report on disabled veterans and those who were homeless. And they did. They found veterans suffering from shell shock in county homes, in jails, on the streets, in the woods… and that became his quest: for a Veterans Bureau.”

On Aug. 9, 1921, his quest came to fruition when three federal agencies were consolidated into one U.S. bureau to serve veterans, which in 1930 evolved into the Veterans Administration and in 1989 was elevated to Cabinet status as the Department of Veterans Affairs.

Galbraith, however, did not live to see completion of his primary goal. He died two months earlier, June 9, 1921, in an automobile crash in Indianapolis. A memorial shrine was dedicated in his memory in Cincinnati two years later, and thousands attended the ceremony to remember what he had set in motion across a century he would not see unfold.

Ohio State Treasurer Robert Sprague, a Buckeye American Legion Boys State alum, told the crowd that his experience in the youth program was essential to his career in public service. But that was not the main reason he came to recognize the Legion’s centennial Friday night.

“I wanted to be here in my professional capacity, as the treasurer for the State of Ohio, to tell you about our commitment, our official commitment, as a state, to our veterans and to your organization,” Sprague said. “But this is also a personal night for me and for my family. My great grandfather was Ralph D. Cole. He was one of the founders of The American Legion, one of those soldiers in Paris, with Teddy Roosevelt (Jr.) and 18 others, who helped found The American Legion. I know from some of his notes that were taken during those meetings that they wanted the Legion, first and foremost, to be about veterans and supporting veterans when they got back from the Great War. They made a very instrumental decision early on, and that was that they were going to take care of veterans, whether or not they were members of The American Legion. I just want to thank you for continuing that tradition.”

Lt. Col. Cole, who had served three terms in the U.S. House of Representatives before World War I, and another Legion founder, Eric Fisher Wood, took on the immense challenge of contacting, in writing, all divisions of the AEF still stationed in Europe, as well as the press, to alert them of the March 15-17, 1919, Paris Caucus that launched the organization. Cole went on to become a devoted Legionnaire in Findlay, Ohio, where Post 3 is named in his memory.

“My great grandfather was willing to lay down his life for his country, but he actually lost his life in service to The American Legion,” Sprague explained. “He was a state commander (in 1932) and was traveling to northeastern Ohio to make a speech one evening and was in a car accident and lost his life. But I know that if he were here today, he would have told you that it was worth it – the service and the sacrifice was worth what you have done.”

Spanogle traversed the century in his remarks, including The American Legion’s role in drafting and fighting to passage the Servicemen’s Readjustment Act of 1944, better known as the GI Bill. He talked of the challenge chief architect of the measure, Past National Commander Harry W. Colmery of Kansas, had in distilling more than 600 congressional and American Legion ideas into one, succinct 10-point plan and the massive team effort it took to get the bill onto President Franklin D. Roosevelt’s desk on June 22, 1944.

The past national adjutant and 50-year member of The American Legion also paid tribute to the role Ohio and one prominent department member – John Sommer – played in achieving service-connected disability benefits for Vietnam War veterans suffering with diseases caused by exposure to the toxic defoliant Agent Orange.

“John Sommer started as your department service officer when he was 23 years old,” Spanogle said. “A combat medic in Vietnam, John went on to become the executive director of the Washington office when I was the national adjutant. John Sommer and Jeanne Stellman and Steve Stellman, Columbia University epidemiologists, and Col. Dick Christian, who is now deceased, asked six departments to go out and interview Vietnam combat vets, and those who were not in Vietnam, on their health, related to Agent Orange and cancer … six states. Ohio was one of them – all volunteers. The Centers for Disease Control spent millions of dollars on a study and poo-pooed Agent Orange, and said there is nothing to it. With our volunteers, we spent $86,000 – and that was to hire students to input the data into a computer. Six years of scientific protocol later, that is why you have disability (recognition) today for Agent Orange.”

Air Force veteran Derek Blumke, co-founder of Student Veterans of America and a member of The American Legion’s 100th Anniversary Observance Committee, told the crowd how the organization helped him through the transition from service when, as a 26-year-old veteran, he found himself feeling isolated among more than 40,000 students at the University of Michigan.

“I have been involved in the Legion for a decade now, being a part of this family,” he explained. “I truly care about it. This is really a call to everyone here. The American Legion is an incredible organization – literally wrote the GI Bill and passed it through Congress. It has been one of the pillars of our democracy for the past 100 years.”

A number of SVA/American Legion members were on hand for the celebration. Blumke recognized them from the podium and implored his fellow Legionnaires to keep showing them the organization’s value. “Student veterans, it’s now our responsibility to make sure you are getting involved.

“In college, I don’t think I truly appreciated the impact this organization has had on our country and our communities,” he said.

To the students at the celebration, he added, “I’m asking you all to put on the cap – I struggled with that for a couple of years, and actually, now I am really proud to be wearing the cap. This organization has incredible potential. We have thousands of posts across the country, 520 in the state of Ohio – you’re bigger than Starbucks! What if we really leverage our resources and provide programs and services for veterans to help them get jobs, help them get investment from other veterans for small businesses they are starting up … ? We’ve got an incredible history to be proud of and an even more inspiring history to look forward to.”

American Legion Department of Ohio Adjutant Suzette Heller, a post-9/11 veteran who used the GI Bill and was part of the founding generation of SVA, announced that a portion of proceeds from the centennial event would help pay for scholarships to help student veterans attend the annual SVA national convention, which she noted has grown from about 400 attendees when she first started as an SVA member to more than 2,200 at the 11th convention last January in Orlando.

Heller referenced the Department of Ohio’s long and valued scholarship program over the years, which has helped thousands of high school students, veterans and surviving dependents obtain college educations. “I am proud to say we are not new to the business of administrating and granting scholarships,” she said. “There is certainly no coincidence that The American Legion has a special interest in the ranks of student veterans. We created the GI Bill, which essentially created the middle class of America. That is something to be proud of.”

U.S. Sen. Sherrod Brown, D-Ohio, delivered a video message and a proclamation to the centennial ball crowd, noting the impact the Legion has had over the years. “For a century now, Legionnaires have come home, they have hung up their uniforms, and they have continued to serve,” he said. “From your scholarships to your food drives to your career fairs and community events, you never stop giving back.”

A 12-year member of the Senate Committee on Veterans’ Affairs, he added, “It’s our mission to give you the opportunities and the quality of care that you earned. You’ve done so much for our country. You ask for little recognition. You’ve earned it many times over. Happy birthday – 100 years – to The American Legion.”

Ohio Department of Veterans Services Director Deborah Ashenhurst presented a proclamation to Legionnaires from Gov. Mike DeWine and Lt. Gov. Jon Husted, which read, in part: “We are truly blessed to live in a land of unparalleled liberty and opportunity. But these blessings do not come without cost. They are bought, and they are paid for, by the service and sacrifice of generations of American military men and women, from 1775 right up to the present moment.”

Heller, in closing, told the crowd that The American Legion’s message of legacy and vision are not confined to Ohio or any one department. “This centennial ball is but one celebration happening globally this evening and throughout the weekend,” she said. “Tonight and every day, we tell our story, about how The American Legion has been instrumental in contributing to the betterment of the world and the people in it, for God and country. American Legion Family is what every one of you are to me. We stand for the greater good. There is no greater reward.”

*higher quality version of the video can be found Here